10 Biggest Upcoming Events in 2019 in the World 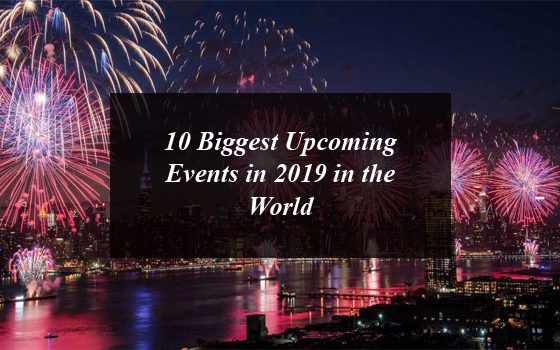 Everything about the big events happening in 2019 in the world.

10 Biggest Upcoming Events in 2019 in the World . Today we will talk about the upcoming events in Pakistan and other countries of the world. There will be a number of events happening in 2019 to enjoy but today here we are talking about the 10 biggest upcoming events in 2019 that are going to happen in Pakistan and other countries.

Checkout the 10 biggest upcoming events in 2019 in the world.

There will be two solar eclipses in 2019 and the world is to witness them from South Asia to South America. The total solar eclipse will pass over southern parts of Chile and Argentina, and parts of the South Pacific on 2nd July, 2019.

The other solar eclipse 2019 will be in the December that will be over the Arabian Peninsula and South Asia.

There will be a total lunar eclipse 2019 that will occur on 21st January and will be witnessed over northwest Africa, Europe, and the Americas. It will incredibly be a rare spectacles of nature because the upcoming Super Blood Moon eclipse is set to be a particularly brilliant event.

On the other hand the partial eclipse of the Moon will be visible in the central and eastern Africa, Europe, and Asia.

The other supermom eclipse will be six months later on 27th July, 2019.

In 2019 the royal love birds will have their first baby. Prince Harry and Meghan Markle are expecting their first baby that will be a beautiful addition to the Windsor line sometime in the spring.

Another royal wedding is on the card the daughter of Queen Elizabeth II’s cousin, Lady Gabriella Windsor is engaged to marry Prince Michael of Kent.

This royal wedding is schedule to rake place in spring 2019.

5. Arrival of 3D-printing in Medical Field

Yes we are talking about the 3D bioprinting in the medical field, advanced 3D metal printing which will transform developments, and even more accessible 3D printing at home. The printing giant Xerox is getting into the 3D printing game, and has plans to develop an at-home 3D printer in 2019.

The episodic serial Game of Thrones are finally going to end in the month of April , 2019, however, HBO head of programming Casey Bloys has hinted there could be another agonizing wait between the end of Game of Thrones and the beginning of the first spin-off show.

7. A transition of power in Japan

The year 2019 will make history when the octogenarian Emperor Akihito will leave his designation in April after the royal reign of nearly three decades.

After the Akihito steps down his son, Crown Prince Naruhito, will immediately take up the throne in May. New Emperor’s accession, as public holiday, creating 10-day Golden Week in 2019 in Japan.

PCB is going to host the Pakistan Super League 4th Edition (PSL 4) in February, 2019. The event will kick off on 14th February in UAE.

The opening ceremony of PSL 4 tournament will be a fun filled event with the glittering stars and after the opening ceremony there will be opening match between Islamabad United and revamped Lahore Qalandars on 14th February, 2019 at Dubai Cricket Stadium.