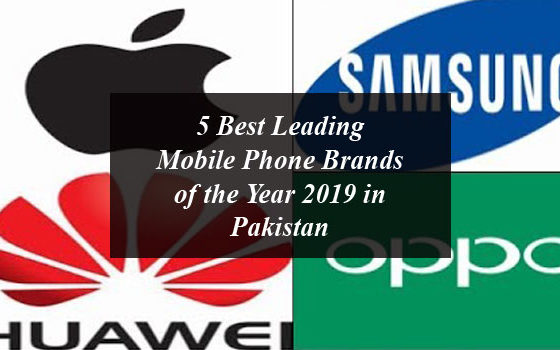 Since almost a decade we have seen a drastic increase in the telecommunication industry. With the same speed, technological advancement has taken over a huge part of our lives. Under this scenario, we must not forget the roles that mobile phone play in our life. They have kinda become the survival kit of top to bottom every other person.

With all the development it goes without saying that how quickly mobile phone companies have emerged and succeeded with their products. To cater to the growing demand for mobiles every other day there is a new smartphone being introduced in the market. Smartphone companies are giving cut-throat competition to each other in order to make their place in the market as well as in the hearts of their consumers.

Here we have the top five mobile phone brands in Pakistan that have made their name with their latest smartphones made up with the integration of the latest technology in all the domains be it software, hardware, camera or whatsoever. Let’s check out.

Samsung without any doubt has a long history in manufacturing all sorts of electronic items that offers you a complete range of products. In light of the same, Samsung mobiles are also known to have deep roots in smartphones history. Samsung was the first one to introduce the first Android smartphone back in 2009. Now at present, Samsung mobiles with 22% market share (as per records of 2017 Q2) is a leading smartphone brand globally. Samsung has phones for all of its prospects; low, mid and high class. They are known for their performance, features and brand equity. Starting right from the lowest phones like J series to the most expensive S10 Plus or Note 9 all the Samsung phones comply with the promised standards and never fails to disappoint its customers.

We all know how efficiently Apple iPhone has made its name in the mobile phone industry. With its ever so amazing and sleek smartphones, Apple has actually won the hearts. iPhones have their own separate identity and they stand out for themselves independently. It is the top of the mind brand especially for the people belonging to the elite class who consider it as a status symbol. Surprisingly, its customers are so loyal to the brand. Apple iPhones are packed with all the best features like for instance attractive designs, heavy-duty cameras, RAM, memory and so on. However, it may not be in reach of everyone as iPhones are pretty much expensive. Nevertheless, if money is not an issue then iPhones are the best smartphones.

Huawei is a Chinese mobile company that came into existence a few years ago. Huawei phones are getting better day by day. Huawei, through its latest smartphones like P20, Y9 Prime, Mate series was able to grab the attention of the masses. As per the resources, Huawei claims to surpass Apple’s position in the international market. Though they still need to work hard to expand its roots more both nationally and globally.

Oppo mobiles is also a new entrant that came into being some couple of years ago. The prime positioning of Oppo was based on selfies and photography through which Oppo mobiles managed to capture a considerable number of people. Especially, the youth who were not able to afford expensive smartphones with good cameras. Currently, Oppo is ranked as a fourth-leading smartphone manufacturer and is expected to perform even more good in the future. Oppo mobiles are also power-packed with all the features, good bodies, decent camera quality, and affordable prices.

Qmobile is a Pakistani based smartphone brand that comes with affordable phones carrying all the features that you would want to have in your phone. Qmobile smartphones are good in quality as well as specs. The best quality that you can buy at an economical price.

According to our findings, these are the top brands of the year 2019 that are ruling the smartphone market in Pakistan. Now if you plan to get a new phone for you then, first of all, determine the preferences that you will focus on while buying a phone. Meaning to say that identify the prime features that are must-haves in your point of view. After that, choose the best phone that maintains a balance between your wants and your budget.