A Girl Should Know These Things Before Signing On Nikah Nama 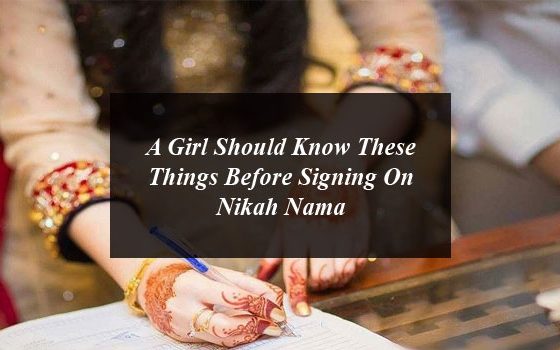 Marriage is a union between two individual people and their families bonded by holy matrimony.

When two individuals plan to marry, they think of nurturing a family together, committing their life to each other.

The explanation of marriage differs from place to place, it not only between cultures and between religions, but usually it is mainly a tradition in which personal relationships, generally sexual, are recognized or certified.

In some religions and culture marriage is regarded as the most compulsory before tracking any sexual activity.

When expressed mostly, marriage is regarded as a cultural universal. A marriage ceremony is known as a wedding and individuals may marry for some motives, including legal, social, financial, libidinal, emotional, spiritual and religious drives.

Marriage in Islam is a legal agreement between two individuals (men and women). Both the individuals are to consent to the marriage of their own free wills.

In Islam a marriage is performed as a formal binding contract – verbal and on papers, it’s an integral religious duty that outlines the rights and responsibilities of the groom and bride.

In Islamic marriage there must be two Muslim witnesses on signing of the marriage papers (Nikkah Nama).

In addition to the customary marriage there is a different fixed-term wedding known as zawāj al-mutʻah (“pleasure marriage”) allowable only by the Twelver branch of Shia Islam for a pre-fixed period.

There is also Nikah Misyar (zawaj al-misyar, traveller’s marriage), a non-temporary marriage with the exclusion of some terms such as living together, allowable in Wahabism Islam.

Some of the sects in Islam are allowed Nikah urfi and some sects allow Nikah halala.

You may have signed a lot of agreements or contracts in your daily life but when we talk about that marriage there comes the signing of the Marriage papers (Nikkah Nama), which you have to sign once in a life time.

All girls dream of getting married and to become a bride one day.  In Islam the two individuals have to sign the Nikkah Nama which is responsible to place two man and woman in a holy union that would drag them in marriage and it’s the only permissible method of getting married in Islam.

The importance of Nikah Nama is not only that it bind the two individuals in a bound of marriage legally, it also provides a woman her own beneficial rights that she can state in the papers and claim them after marriage.

Usually in Pakistan the sole purpose is to get marry and girls are too careless that they don’t pay heed toward these rights that should be mentioned in the Nikkah Nama before signing the papers.

It’s a time for the girls to wake up and get out of the decorative world in which they only look gorgeous, getting their best shots and signing the papers with the peacock feathers decorated pen. Marriage is not getting the prince charming and live happily ever after, no one knows about the future happenings and it would be in your best interest instead of wavering off those rights.

These things are just for the time being the most important is the new journey of life is about to start and you have to know about your rights that’s must be written in the Nikkah Nama and you must be aware with before signing it.

Every girl should study the nikah nama before the marriage and install all the right given by Islam to a female before getting married.

To sign the Nikkah Nama comes once in a lifetime so a girls before signing it first see at the end of it you get a fairly big blank space to write down any extra conditions you want and the guy has to follow it officially.

Our guardian and moulvis do not talk about the rights given to girls during Nikkah, the girl are also not allowed to speak even upon this matter as it regard as “shameful act”.

In Islam, no one should make a woman feel shameful for stating her right and wants for a marriage at the time of signing. This is her right and her community must defend that right.

Most important is you know how they make you sign the whole papers…….do you want the right to divorce or not? You can exactly add in anything there including divorce conditions, pocket money, house work, your own work details/necessities or any other tyep of commitment.

When Nikkah of Hazrat Fatima and Hazrat Ali (R.A) was the Holy Prophet (S.A.W) added the clause and many times people don’t tell you this.

These are the rights given to you by Allah Almighty, So Don’t Let Anyone Take These Rights Away From You.

Here are these right you should mention in your Nikkah Nama before signing it;

The first is Haq-Mehar which is a gift that is given to the woman by her husband. Haq-Mehar is something that would not be spared at all and must be written in the Nikkah Nama.

The amount of Haq-Mehar is managed in two ways:

The groom can decide and bride has to accept it

The bride can decide and the groom has to accept it.

Secondly the husband has to pay you a pocket money for your personal expenditures, other than the monthly expenses he gives to you.

After having a child you start breastfeed to his/her, it’s another right of a women to as the husband to pay for it, and he can’t disagree because its you’re right.

If you do a job, the money you get from job it’s yours own husband has no right to take it from you. He also can’t ask you to spend it on the house or anything else.

Consent to intimacy is your right he has to take your consent granted otherwise it’s a marital rape and is recognized in the court of law.

Your husband can not get the part in you will or your property if you have any.

In Islam the guy has to pay the wedding expense from his own pocket. To whatever extent he is capable of spending he has to spend.

There is no concept of Dowry (Dahej) not in Islam and in Law.  If the groom family ask the dowry you can sue/ file a report against them on demanding the gifts and other items on the name of marital gifts.

Although second marriage is permissible in Islam under some conditions. You can also add the clause that you husband would not re-marry without your permission.

So, please girls must write down your rights in the extra black space given in the Nikkha Nama. These rights are permissible in Islam and your legal right in order to prevent you from serious future harm by her husband or in-laws, based on local customs and tradition and to show off the people.

The advice to you is to not be uncertain about money-related matters in marriage, though you have the right to specify certain lawful rights in the Nikkah Nama as protective methods against future abuse (if any).

Due to the dominance of unawareness & repressive cultural practices in Pakistan, girls’ families do worry about how their daughters will be treated by the husband and in-laws after marriage.

So the girls some of the important rights must be mentioned in the wedding contract to avoid future hazards.

Here’s Everything You Need To Know About Breast Cancer: Symptoms, Causes And Treatment
Pakistani Cricket Team Became the First Team to Face Defeat Despite Two Centuries