Being Muslims Say No to Extravagant Weddings in Pakistan 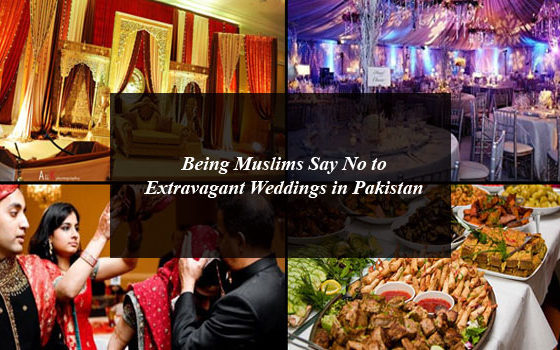 Being Muslims Say No to Extravagant Weddings in Pakistan. Marriage is a very significant milestone in an individual’s life. In Islam marriage is a legal contract (Nikah) between a male and a female.

Both the groom and the bride are to consent to the marriage of their own free wills in front of their parents and relatives. A wedding day is an important day for the groom and the bride. The wedding day signifies mutual understanding not only between couples but also between their families to love, cherish, and honor until they are part of each other family. Marriage is in other words also a commitment of the joining of two families into one.

Spending too much on wedding functions is not the 100% guarantee of the durability of the relationship. In Pakistan, there is an increased rate of separation as well as the increasing ratio of unmarried individuals. But at the same time weddings are becoming extravagant because of costly gifts, event spaces, décor, invites, venue and event planners, fashion designers, jewelers, flower vendors, food caterer, decorator, dance organizers, photographers, abroad honeymoon, etc.

But being Muslims we should consider this trend to spend more and more money on extravagant weddings Pakistan is a wise choice or just a waste of money on useless ceremonials.

Marriage in our country is an occasion for insane displays of spending outrageously. In Pakistan to spend too much on weddings is becoming a trend because people like to show off rather just to perform their duty in a religious way.

Therefore the showy and costly multi-day ceremonies wiping out savings and resulting in debts during this time of the year called the wedding season.

On the other hand, the financial pressure not only causes stress and anxiety but also the lender is going to pay it for years.

In a typical Pakistani wedding, or so to say the upper-class wedding the bride side seems to be the more extravagant because they organize a number of wedding ceremonies including Mangni, Bridal Shower, Dholki, Mayun, Mahndi, etc,

All these pre-wedding rituals from the bride side including a collection of dowry, lavish gifts for groom family and post-wedding events make the wedding more extravagant.

The upper-class Extravagant Weddings in Pakistan are hugely impacting the middle class of society. The upper class in our country uses this beautiful day just to show how wealthy they are.

On the other hand the middle-class, as always wavering between the stratum of society, attempts its best to spend as much as it can and list itself within the upper-class so as to feel proficient.

In the war of the upper class and middle class, the lower middle class of the society face the utmost difficulties not only in raising their children but also for their education and better future. The lower class is too much suppressed in our country that it’s hard for them to make their daughters get married at a good place because they can’t afford to spend lavishly, resulting in ultimately consider leftover girls.

These unmarried or in words leftover girls faced the unwanted stigma which is resulting in suicides and other unlawful activities.

The other dilemma of our society is also to pressurize the girl to get married as soon as possible to avoid the stigma of leftover. This is more about the blows to their self-esteem when the world seems like a proposal market place and if no suitor has expressed a desire to marry she became the unwanted woman. In this so call rishta market the most valuable currency is, of course, the physical aspects of the girl and the also how much property her parents own.

There are a number of cases in Pakistan and we read in newspapers daily that parents just throw their girls in hell in the name of marriage which resulting usually in deaths on account of dowry.

Although Pakistan is a progressing country and has millions of educated people but sadly not much has changed in orthodox and typical thinking of them. They are still at the same point in looking for a beautiful white complexioned girl to marry, having a handsome dowry and at the same time want lavish wedding functions.

A few years ago the Supreme Court of Pakistan has allowed only one dish at weddings and banned needless decorations – a presiding that supports laws that assist in controlling the extravagance of wedding functions.

But the wish to have magnificent wedding functions make families avoid such laws.

Now it’s a time to move forward in order to not only break the orthodox and typical thinking of society but also to make the implementation of the law.  It’s time to reconsider what the actual wedding is and what we have made it?

It’s a time to cut down on the lavishness and spend more money on wedding functions. It’s also a time to say no to dowry which resulting in approximately 2,000 deaths in a year in Pakistan.

An ordinary wedding costs so much that it can burn stoves in many poor homes although Islam also gives us the lesson of moderation. Allah Almighty says,

“Children of Adam, take your adornment at every masjid, and eat and drink, but be not excessive. Indeed, He likes not those who commit excess.” Surah Al-A’raf [verse 31].

It’s a time to say goodbye to all the senseless traditions, too much lavishness on wedding functions and demand of dowry. A girl’s parents should not be made to cough up the dough to marry her off. The marriage should be simple, happy and burden less. Being Muslims we should say no to Extravagant Weddings in Pakistan, the wedding ceremony should be a celebration of togetherness not only for a couple but also for the two families.