Child Rapists Will be Hanged Publicly in Pakistan: Resolution 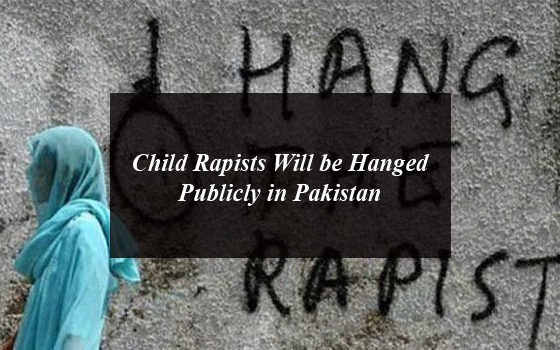 The resolution was presented by Minister of State for Parliamentary Affairs and Pakistan Tehreek-e-Insaf (PTI) leader Ali Muhammad Khan at a National Assembly meeting on Friday.

Earlier in the National Assembly, the bill passed in the name of Zainab on the protection of children suggested a life sentence for those who committed such a crime.

The Minister said that after the passage of this bill from the National Assembly, the bill is now in the Senate but it has not been approved from there, so after passing this resolution, it should be made part of the bill.

He said that the incidence of child sexual violence and murder is increasing alarmingly in society. The children are now becoming insecure in the society and their parents and relatives have shown serious concerns about this issue.

Ali Mohammed Khan said it was now imperative to make strict action to those involved in such serious crimes.

During the voting process the members of PPP have opposed it while the Pakistan Muslim League-N and Jamaat-e-Islam voted in favor of the resolution.

The members of PPP in Nation Assembly and the former Prime Minister Raja Pervaiz Ashraf said that Pakistan is committed to United Nations’ (UN) resolutions on the death penalty, so their party cannot support the death sentence.

It should be noted that the PPP had stopped the execution of a death sentence in its last tenure.

The resolution passed in NA today on public hangings was across party lines and not a govt-sponsored resolution but an individual act. Many of us oppose it – our MOHR strongly opposes this. Unfortunately I was in a mtg and wasn't able to go to NA.

According to a report unrestricted by child rights organisation Sahil in September last year, 1,304 cases of sexual assault of children were reported by the media in the country from January to June. It means that at least seven children are abused every day. In 2018, an adjustment was made in section 377B of the PPC to make the punishment for sexual abuse more severe.