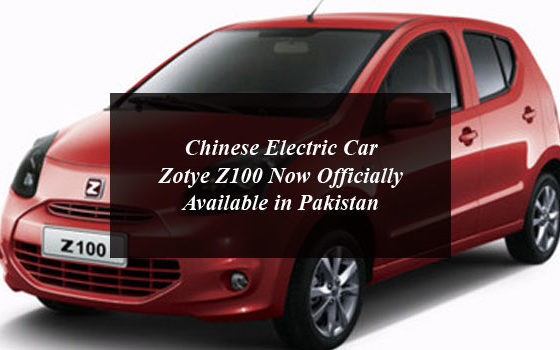 Looking for a Chinese electric car in Pakistan, here is Zotye Z100 hatchback which is now officially available in the country.

There is good news for the electric car lovers in Pakistan a company Topsun Motors has launched its official showroom in Pakistan.

After implementing the National Electric Vehicle Policy (NEVP) in Pakistan the launch of the Topsun MR Motors on in Jail Road Lahore is the first step to move forward for the availability of the electric car in the country. Provincial Minister of Punjab for housing, urban development and public health engineering, Mian Mehmood-ur-Rasheed along with Malik Riaz has inaugurated the opening ceremony of the showroom in jail Road Lahore. Malik Riaz is the managing director of Topsun Motors.

Topsun Motors is the first-ever electric car company in Pakistan in partnership with China. Topsun Motors has officially inaugurated its showroom in Lahore on 3rd January after the collaboration and has unveiled the four Chinese electric car including the Zotye Z100 and the three models of JMC electric car.

Do you remember that the Zotye Z100, the Chinese electric car that HRL Motors introduced back in 2017 for a price tag of Rs. 11.7 lac PKR. The car was launched on Facebook but never reached to the dealers.

The Zotye Z100 is the first-ever electric car of the local Pakistani industry. It is the 1000CC hatchback that is already available across the globe but in Pakistan, the company is waiting for the implementation of the NEVP. After the National Electric Vehicle Policy (NEVP) the electric-powered variant of Z100 will soon be on Pakistani roads.

The Zotye Z100 will be able to run nearly 300 KM on a single charge. It has the 1000CC engine coupled with a 5-speed manual transmission. The company also has a plan to introduce the automatic version of Z100 in the near future. Currently, these models are being imported as totally built units (CBU).

All these electric cars are engine-based and the prices are inclusive of withholding tax. You can see their prices below and they are open for booking:

For more details about the Zotye Z100 electric cars stay in touch with daytimes.pk