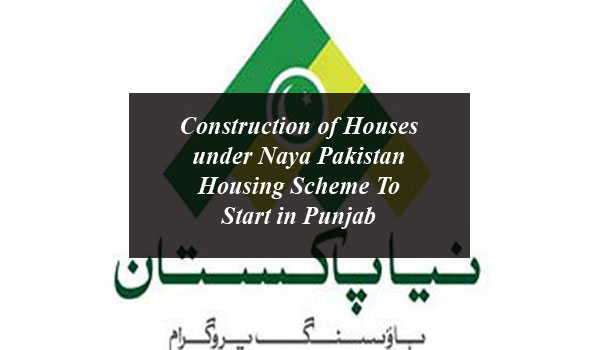 There is a good news for the people of Okara, Chishtian, and Lodhran and the news is that the construction of houses under Naya Pakistan Housing Scheme is all set to begin within few days.

The PrimeMinister of Pakistan Imran Khan has launched the Naya Pakistan Housing Scheme lastyear in order to provide the houses to homeless people.

Under thescheme the government of Pakistan Tehreek-e-Insaf (PTI) has planned to buildhouses as a part of its elections policy.

Now the constructionof houses under Naya Pakistan Housing Scheme is to start in Okara, Chishtianand Lodhran, announced the leader of Pakistan Tehreek-e-Insaf (PTI) and provincialminister for Housing Mian Mehmood Ur Rasheed.

He toldthat as many as 6,000 housing units would be constructed in Punjab in the firstphase of Naya Pakistan Housing Programme and the Okara, Chishtian and Lodhranwould be first cities to have the construction of houses.

Theminister expressed to media that 6,000 houses would be constructed in RenalaKhurd the area of Okara, Chishtian, and Lodhran in the first phase of NayaPakistan Housing Scheme.

He added that PTI government would accomplish all the promises made with the people of the country as per the vision of Prime Minister of Pakistan Imran Khan. The ingenuity of the construction of low-cost houses in three major cities of Punjab is one of the steps towards accomplishing the promises of the PTI government.

Here is the complete details regarding the costof houses:

Five marla on the first floor would cost Rs.2.1 million

How the people get the house under the scheme?

Thehouses will be allocated to the people through the balloting process to thesuccessful applicants. He said that the houses would be officially given to thesuccessful candidates within one and half year.

The reports have revealed that nearly 20,000 housing units would be constructed in Sialkot, Layyah, Chiniot, and Faisalabad in the second phase of the Naya Pakistan Housing Scheme.

How to Apply for Naya Pakistan Housing Scheme? Step by Step Guide