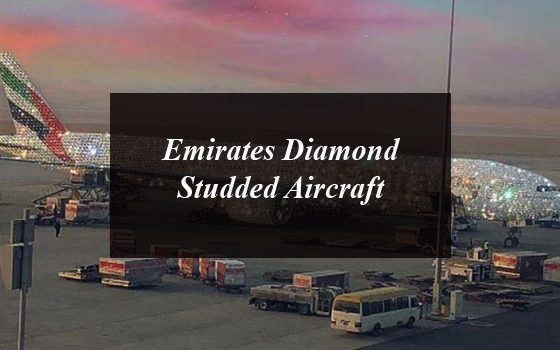 Emirates Diamond Studded Aircraft Picture is Just Breathtaking. You heard about diamond rings diamond necklaces and diamond jewelry but have you ever heard about the diamond aircraft? Off course not at all in your life time.

But here is a plane that is decorated with the diamond studs.

Yes you read the right here the picture of the Emirates Diamond Studded Aircraft went viral on social media claiming that the Boeing 777 plane encrusted with what look like crystals and diamonds.

UAE-based Emirates airline had passionate the flyers excited after an image of one of its aircraft with diamonds went viral in social media. Many people were left doubting whether this was the Emirates airlines latest plane. However, many also guessed that the image was fake.

Timeout Dubai reported on Wednesday that the UAE-based Emirates airline has revealed a diamond emblazoned plane. The official Twitter Page of the Emirates Airlines also features the same picture. The caption of the picture read as,

But it’s only a mock-up image and is created by artist Sarah Shakeel. Yes it’s not the actual plane decorated with the crystal diamond. The jazzed-up airplane is shown parked at a terminal in an airport, surrounded by luggage trucks and sparkling in the sunset.

The image is a creation of Pakistani artist Sara Shakeel who is a dentist by profession. She has originally shared this diamond studded aircraft picture on her Instagram where it went viral and got more than 50,000 likes within hours of posting.

Waiting for my Ride 💎 . . So Ladies & Gentlemen , I am officially flying to #milan to fall in love with #art #culture #italy to witness the love #glamourtalentawards has to offer ! I have to remind myself & all of you again and again, This all happened cause some of you prayed & some sent love 💕 to the universe & God just had to make it happen!! Just an ordinary big eyed – hopeful artist trying to live the best out of the world has to offer! Love you and thank you!!! Can’t wait to share everything with you all! . . . P.s I got a freaking upgrade to #milano !!!! . . . #art #artwork #collageart #artist #vision #fly #high #flying #godisgreat #pink #clouds #hope #lovemyjob #plane #emirates #flyhigh #arte #crystalart #crystalartwork #travel #travelphotography #blog