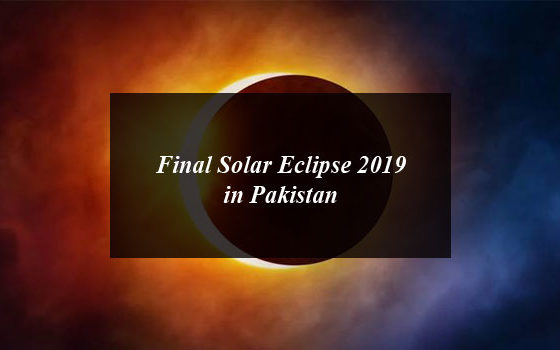 All about the third, final, partial and annular solar eclipse 2019 in Pakistan and other countries of the world with timings, visibility and how and where to watch the live suraj grahan.

The first eclipse of the year 2019 was on 6th January, second on 2nd July and third would be on Thursday 26th December.

What is Solar Eclipse?

The solar eclipse occurs when the new moon moves between the Sun and Earth. It blocks the sun rays to reach on the earth casting a shadow on the different parts of the earth.

The shadow of the moon is not big enough to cover the entire earth so the shadow is always partial in nature. The shadow on the different areas keeps on changing due to the earth and the moon’s constant motion.

The earth incessantly rotates around its axis while it tracks the Sun, and the Moon orbits Earth. This is why solar eclipses appear traveling from one place to another.

What are the different types of solar eclipses?

Partial solar eclipses happen when the moon partially covers the sun disk, as you can see in the image below:

Annular solar eclipses occur when the moon unable to fully cover the sun and the edges of the sun look like the fiery ring, as you can see in the image below:

Hybrid Solar Eclipses are the rare type of eclipses and occur when the same eclipse alters from an annular to a total solar eclipse and along the eclipse’s path.

Visibility of the final solar eclipse 2019:

Solar Eclipse of 2019 Will Create an outstanding ‘Ring of Fire’

This is also the annular solar eclipse of the year 2019 and for the next, we have to wait till 2020. A solar eclipse occurs when the moon passes between Earth and the sun and blocking light from the Sun to the earth.

Is the final solar eclipse visible in Pakistan?

The annular phase of the 26th December, 2019 solar eclipse will not visible in Islamabad, but the sky gazer in Islamabad can watch the partial solar eclipse, depends on the weather condition.

The final solar eclipse 2019 will be visible in the different cities of Pakistan as well including Quetta, Peshawar, Gilgit and Muzaffarabad.

What is the time of solar eclipse in Pakistan? :

The third solar eclipse will begin at 07:50 am PST on Thursday 26th December and its duration will be of nearly 2 hours 26 minutes.

Where’s the best place to watch the annular solar eclipse?

Saudi Arabia is the best place to watch the last solar eclipse of the year 2019 according to the dramatic and astronomical phenomenon and also due to the clear skies.

Sky-gazers would get to watch the partial solar eclipse on December 26, which is considered a rare event but to watch the annular solar eclipse (suraj grahan) with naked eyes is not safe. Doctors and medical experts say that it could damage the cornea of the eyes if you gaze at the solar eclipse without precautionary tools.

What special equipment required to watch the eclipse?

Never look directly at the eclipses without any protective eyewear. It will be dangerous in account to a partial solar eclipse, solar eclipse glasses must be worn at all times to avoid damage to eyes. The harmful UV radiation can burn the retinas in your eyes leading to permanent damage or even blindness. In order to watch the 2019 annular solar eclipse, special types of equipment are required like special solar glasses, darkened welder’s glasses, pinhole cameras and other gadgets.

If you are planning to view the solar eclipse and at the same time want to avoid damage to your eyes wear special solar glasses or use darkened welder’s glasses.

Despite the invisibility of the eclipse in Pakistan, India and other countries of the world viewers can observe the event through live streams of space agencies and certain observatories and also installing the different apps .

In the year 2020, there will be six eclipses out of which 2 will be solar and 4 will be lunar. The first solar eclipse 2020 will be on 21st June and the second will be on 14th December.

If you capture an amazing solar eclipse photo and would like to share it with daytimes.pk and send your photos, comments, and your name and to daytimespk@gmail.com