Friday to be the Weekly Holiday in Pakistan 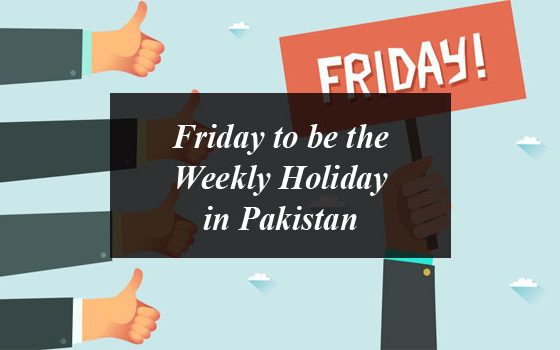 Friday as a weekly off instead of Sunday, federal government to declare the final decision soon.

There are media reports that the federal government is considering to declare the Friday as the official weekly holiday in Pakistan instead of Sunday.

The government is considering to take this decision by keeping in view of Pakistan’s trade relations with Arab countries that have Friday as the weekly holiday there.

Recently the Saudi Crown Prince Mohammed bin Salman visited Pakistan and signed several trade contracts in order to trade with the country. the Arab countries have the Friday as weekly holiday and now the Pakistani government is bearing in mind to alter the weekly off to Friday instead of Sunday.

This move of Pakistani government will be meant at strengthening business and trade association with the Arab countries, particularly with Saudi Arabia and the United Arab Emirates (UAE).

As Pakistan observes its weekly holiday on Sunday and Arab countries have their off on Friday, its affects the business activities between these countries.

Pakistan and Arab countries can only share business trades on four week days including Monday, Tuesday, Wednesday and Thursday and this will increase the business activities between the countries.

Information Minister Fawad CHaudhry, Today on Wednesday has rejected reports that government may announce Friday as weekly off. He said these are just rumors and nothing else. He announced on his Twitter page,

“No change in weekly holiday calender is under consideration, all such rumours regarding change in this regard are baseless.”

No change in weekly holiday calender is under consideration, all such rumours regarding change in this regard are baseless— Ch Fawad Hussain (@fawadchaudhry) February 21, 2019

How to get Zong Golden Number?
Samsung Raises the Bar with Galaxy S10: More Screen, Cameras and Choices