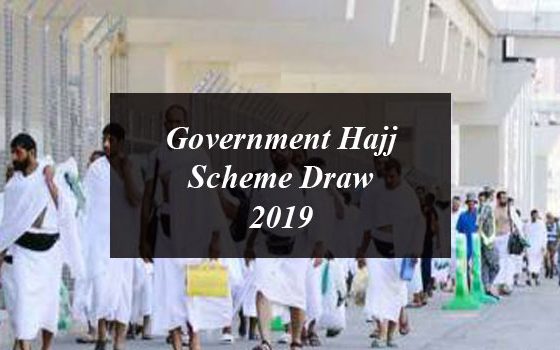 Government Hajj Scheme draw 2019 is all set to be held today on Tuesday, 12th March.

There is a good news for those who have applied to perform Hajj under the government hajj scheme 2019, the hajj draw will be held today and the Minister for Religious Affairs and Interfaith Harmony Dr Noor-ul-Haq Qadri will do the balloting.

All the candidates who have applied for the hajj under the government hajj scheme will be able to check either their name is in the list or not by visiting the official website of the Ministry of Religious Affairs.

The results of hajj draw will be uploaded on the official website and the lucky pilgrims will also be informed via SMS.

This year the government has also increased the hajj quota up to 5,000 more pilgrims and nearly 184,210 Pakistanis would perform Hajj in 2019. Under the government hajj scheme 107, 526 people will be accommodated through government schemes and more than 71,684 people through private schemes.

This year the old citizens, over eighty years, ought not to participate within the lucky draw and can directly select hajj below the government’s hajj scheme 2019.

This year government hajj scheme package would be Rs.436,975 for Northern which include Islamabad, Lahore, Peshawar, Sialkot, Faisalabad Multan and Rahim Yar Khan and Rs.426,975 for Southern regions of the country which includes Karachi, Quetta and Sukkur.

The Pilgrims would have to pay additional Rs.19,451 for Qurbani.

How to avoid Hajj Scam?

In order to prevent Hajj scam you need to confirm the authenticity of the Hajj group organizing companies (HGOs).

If you are to perform holy ritual through the Hajj Group Organisers (HGO) you need to ensure the HGO’s authenticity by sending the first four digits of HGO’s enrollment numbers from mobile phone to 8331.

Infinix Hot 7; How Did it Beat Other Rivals?
Now Health Insurance is Mandatory For Visiting Saudi Arabia