How to Fix Slow Internet Speeds on Smartphone? 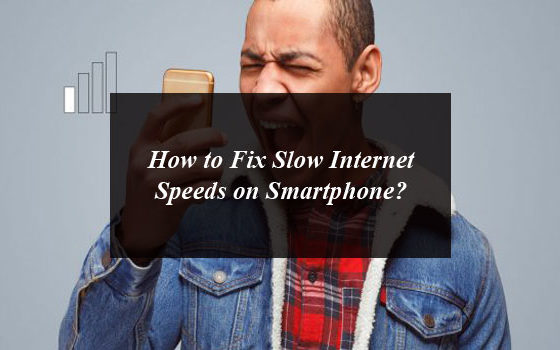 Smartphone has become the addiction and the main way to communicate with people using the internet. In order to use the smartphone it’s necessary to have the fastest possible internet speeds. Although the telecom operators are providing the 3G and 4G internet to their users, sometimes lots of other things become the cause of slow internet speeds.

Let’s have a look at the reasons which are contributing in slowing down the internet on your smartphone and here is how you can fix this issue.

If you using the Wi-Fi internet on the smartphone and facing the slow internet speeds issue, it’s all due to the wrong placement of the Wi-Fi router. A Wi-Fi signal has a range of up to 230 feet, and as it travels the slower it becomes.

The physical objects, like walls, floors, and doors, etc contribute a lot in slowing down the internet speed. Try to change the Wi-Fi router position in order to get better Wi-Fi coverage throughout your home. If doing so does not work well with improving the internet speeds there must be some other problems as well.

So you need to fix those problems to fix the slow speeds of the internet.

Another Wi-Fi router issue that makes your smartphone internet slow is congestion. If you live in apartment blocks or in such a community where lots of internet devices are present it can also be the reason of degrading the performance of internet signals for everyone. For fixing this issue you need to use software that can aid you to find the best channel for your router. We recommend the Wi-Fi Analyzer app on Android or the AirPort Utility on iPhone.

Another reason of slow internet speeds on smartphone is the Wi-Fi noise, which means the Wi-Fi router is also susceptible to noise from other appliances in your home including microwaves, wireless doorbells, and cordless phones. All these items can interfere with the Wi-Fi signals from a router running on the 2.4GHz band. Mostly the routers work on 2.4GHz band and 5GHz band and if you have the 5GHz band router it is less prone to interference.

So if you are facing slow internet speeds make sure that the connected devices support 5GHz band to fix this issue.

On public Wi-Fi, the speeds you’ll get can vary wildly, and you shouldn’t rely on getting a superfast service from something you aren’t paying for. However, even after checking your expectations, you might still end up getting a lot worse performance than you could.

If you’re questioning why your smartphone internet has become slow, it could be because of a change made on the device itself. One reason could be the use of a VPN, which provides you security and privacy online. If you are using the free VPN apps disable it temporarily to see the improvement in the internet speed, because free VPN are also the cause of the terrible performance of the internet on the devices.

On the other hand, the best premium VPN providers have apps for iPhone and Android devices that guarantee you much better speeds with improved privacy and security benefits.

If you are using the mobile data with the 4G coverage and at the same time feeling your internet speeds is slow, the poor 4G coverage is also the reason of it. There are many reasons of poor 4G speeds like lots of 4G users at the same place, a single 4G tower to your area, weather conditions, etc. contribute a lot in slowing the internet speed.

If you have a strong Wi-Fi connection and the best coverage of mobile data but at the same time facing slow internet, you must be having a slow mobile phone. It’s all because the mobile phone’s hardware might be taking its time rendering a web page, for example, or be struggling to handle the graphics in an online game.

You can face this issue with the older and low end Android mobile phones.

on the other hand, if you are using the high-end device and facing the slow speed of internet the reason could be the installation of too many apps in your mobile phone because the syncing of these apps in the background can hog too much of your available bandwidth.

For tacking this issue you can download a manager app on an Android phone. Also, keep your apps up to date and uninstall all the unnecessary apps form your mobile phone.

On the whole, it can be said that there are a number of reasons contributing to slowing down the internet speeds on smartphone. Some of them are mentioned above and are easy to fix in no time.

How to Check Your SIM Number?
How to Block Calls and SMS for Free?