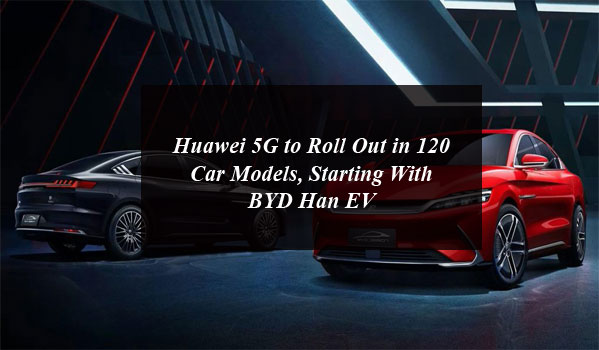 Huawei’s 5G-based HiCar technology is not just another auto infotainment system. It’s more like an interface to the car’s core operating system and a vehicle-to-X channel to the road. HiCar will first appear on the BYD Han EV in June, before arriving in models from about 30 different auto brands.

Analysts view 5G adoption in cars (and roads) as the ultra-fast communications backbone to autonomous vehicles, smart cities, and the internet of things. It also provides in-vehicle features such as controlling windows, locks, AC, and streaming media.

BYD, China’s largest EV maker, will use Huawei’s HiCar technology in its upgraded Han flagship electric sedan starting in June. The Han EV expected to have a starting price of about $40,000 — similar to the cost of a Tesla Model 3 in China. It shares some of the same styling as well.

But that’s just the beginning of the rollout of Huawei’s 5G into vehicles. Huawei has signed up about 18 different automakers to use HiCar. The company has been working with Audi. BYD also has a big tie-up with Toyota to make EVs. China and Japan are also collaborating on next-gen DC fast-charging standards.

The Han EV is equipped with BYD’s latest lithium iron phosphate batteries in multiple pack sizes, providing up to about 375 miles of range (in the NEDC test cycle). It travels to 60 mph in less than 4 seconds. The BYD Han is available in single-motor and dual-motor configurations. The Han flagship model is also available as a plug-in hybrid.

Among battery makers in China, BYD was ranked second with 10.76 GWh capacity, behind battery giant CATL. The company claims that its blade-shaped design increases space utilization by more than 50% compared to other pack layouts — and that it’s safer than competing designs.

A conspiracy theorist could have a field day with Huawei’s incursion into cars. Huawei Technologies is the world’s largest telecommunications equipment supplier. (The Trump administration added the company to the US blacklist in its trade war with China.)

Huawei has not expressed interest in making cars, but instead in becoming the central 5G communication systems for automobiles and the built environment. This could pave the way for ubiquitous smart autonomous driving systems.

In January, Huawei signed up with Dutch Sat Nav provider TomTom to pull away from Google systems.

Huawei is known to have developed extensive AI systems for autonomy and cloud-based communications, and integrating those systems into an automotive ecosystem. APIs can link camera data to core vehicle systems, including steering, as well as driver-monitoring systems. The robotaxi fleet from autonomous driving startup AutoX recently started operations in Shanghai, where the roads come equipped with C-V2X systems.

Electric and Hybird Cars Will Available in Pakistan