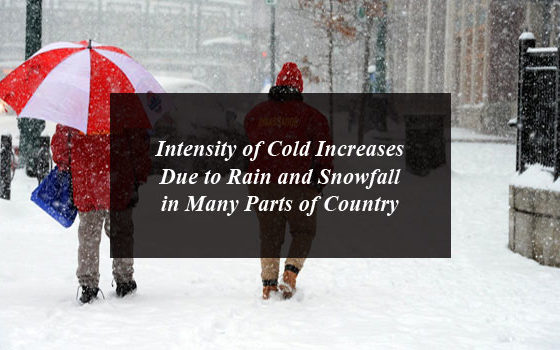 According to media reports, cold intensity  would be increased after rainfall which is expected in Lahore, Rawalpindi, Islamabad,Kashmir,Gilgit-Baltistan,  Balochistan (Quetta, Kalat, Sibbi, Nasirbad, Makran divisions), Malakand, Hazara, Mardan, D.I khan, D.G khan, and many other parts of the country.

It has also forecast light rain in Lahore, with colder winds blowing in from Quetta. The Pakistan Meteorologist Department has forecast rain in northern Punjab, Peshawar, Abbottabad, Mansehra and Murree on Sunday. More snow is expected in Murree, Gilgit and Kaghan.  According to Pakistan Meteorological Department (PMD), Skardu remained the coldest city on Sunday as -21°C was the lowest temperature recorded there.

Northern parts of the country have experienced heavy snowfall in the past couple of days. Snowfall has also blanketed Murree after which tourists came in large number to enjoy the weather. Many cars were stuck as well due to blockage of roads.

After Heavy Snowfall how Murree and Nathyagali Look [Pictures]

Mountains and trees in amazing scenery of Murree and Northern Areas and also remained under the veil of snow. There would be heavy rain, huge thunder, wind, rain and very low temperature.

Here you can watch the pictures of the beautiful scenery of Pakistan after the snowfall.

The clouds and cold wind in the country have made the weather as well as the moods of people pleasant, and brought winter with them.
The Met Office predicted that there are chances of more snowfall, rain in Malakand division  Hazara division, Murree and Galliyat, Kashmir and Gilgit-Baltistan within the next few days.

Weather would remain very cold and rainy in most parts of the country, so it would be very risky for the travelers who want to enjoy the snowfall in the northern areas of Pakistan, because in the presence of Heavy Snowfall the visitors may not perform their outdoor activities as the roads are blocked due to snow.

Snowfall has also created difficulties for local residents, especially those residing in rural areas. The roads are also blocked after heavy snowfall the Abbottabad and Muzaffarabad.

Due to intense cold and fog in Pakistan the flight operations at  Lahore, Islamabad, Peshawar, and Multan airports is badly affected.  Trains have also met with delays due to thick fog on the tracks.

The educational departments in the country are also considering to extend winter vacations. PMD has advised citizens to use clothes made out of thick heavy fabrics in order to get warmth.

For more weather updates stay in touch with daytimes.pk

How to Have the Police Clearance Certificate in Pakistan?
New Year 2020 Gift: Govt To Increase Petrol Price Up To Rs.2.61 Per Liter