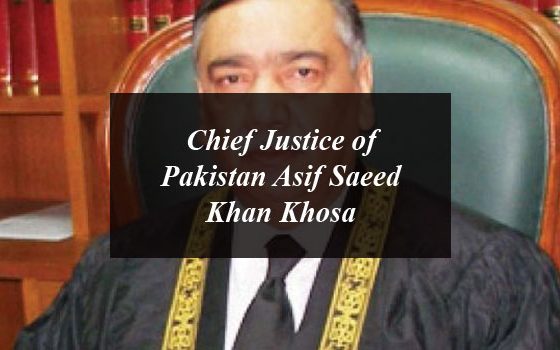 Justice Khosa is now become the 26th Chief Justice of Pakistan today on Friday 18th January, 2019. He has taken the oath in presence of the Prime Minister Imran Khan and President Arif Alvi. The oath taking ceremony was held today on Friday in the President House Islamabad, where Arif Alvi has taken the oath from the new chief justice of Pakistan.

Asif Saeed Khosa, who was born on 21st December, 1954, in Dera Ghazi Khan will serve as the Chief Justice for almost eleven months to retire on 20th December this year.

Saqib Nisar on the other hand had render his services as the Chief Justice of the Supreme Court for twenty months.

Neither the president nor the prime minister has any role in the appointment of Chief Justice, except that the president issues the notification for such mandatory choice and administers the oath of office.

According to the rules, the senior most judge inevitably stands higher as the chief justice and is officially sworn in as such after the retirement of the obligatory chief justice.

The new chief justice of Pakistan Mr. Asif Saeed Khan Khosa belongs to Khosa tribe of Baluchistan. Justice Khosa passed his matriculation in 1969 from the Multan Board, securing the fifth position.

He secured a National Scholarship Award as well.Later on him completed his Master of Laws with specialization in Public International Law from the Queens’ College, Cambridge. On 26th July 1979 he was called to the Bar at the Lincoln’s Inn, London

In May 1988 he was appointed as the Bench and was also appointed as Lahore High Court Judge. On 18th February,  2010, he was elevated to the position of a Supreme Court judge.

It is important to mention here that Mr. Khosa was among those senior judges who refused to take oath under the Provisional Constitutional Order (PCO) in the reign of Pervez Musharraf in 2007.