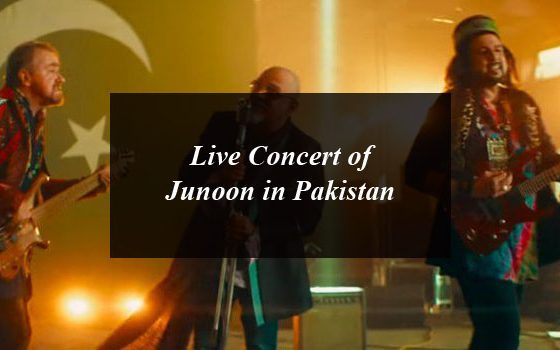 Junoon Group is back with the Live Concert in Pakistan after 13 years in December, 2018.

Get Ready for Live Concert of Junoon in Pakistan after 13 Years. There is a good news for the Junoon group fans. The melodious group has decided to come back with a live concert which is going to live on 25th December, 2018. It seems hard that the Junoon group would reunite after 13 year of breakage, but now they comeback with three members and now is preparing for the live concert. The reunion however, didn’t take place as easily as it seems.

“This December, wait for amazing surprises.”

All the members of the group including Ali Azmat, Salman Ahmed and Brian O’ Connell reunited this year with a bang on Independence Day 2018.

Junoon is all set for its Sooper comeback!

On Independence Day 2018 the Junoon group has sung a revised version of the track Khudi and now all set to thrill its fan with a live concert.

Where will be the Junoon Live Concert?

The exclusive Junoon live concert will be at Arabian Sea Country Club in Karachi on 25th December, 2018. As a accumulation to the Junoon reunion concert, 200 different musicians of Pakistan are coming together to sing a rendition of Jazba Junoon, which is being produced by the Islamabad-based Sarmad Ghafoor.

The second concert is supposed to take place on 18th January, 2019 in Dubai.

The tickets are priced between Rs. 3000 and 7000 and available for purchase at yayvo.com