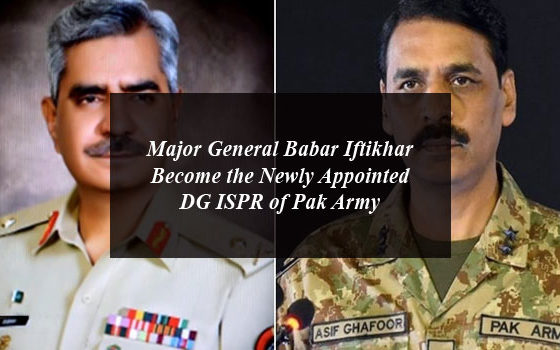 According to the official spokesperson of Pak Army, the Major General Babar Iftikhar has been appointed as the new DG ISPR.

Major General Babar Iftikhar belongs to the Arms Corps unit Six Lancer, who received a commission in the Pakistan Army in 1990.

Major General Babar Iftikhar has extensive experience working at command and staff positions, having also served as commander of the Infantry and Armed Brigade during Operation Zarb-e-Azb.

HE has also served as an instructor in Pakistan Military Academy (PMA) Kakul and at the NDU.

At the ceremony, Major General Asif Ghafoor said that he is thankful for the love and cooperation of all Pakistanis, and also grateful for the cooperation during his tenure, especially of the media. He also showed his best wishes for the new DG ISPR.

It is pertinent to mention here that in December 2016, Major General Asif Ghafoor was appointed as the DGISPR in place of Lieutenant General Asim Bajwa.

2020s First Chand Grahan in Pakistan to be Visible Tonight
Here’s How Overseas Pakistani Can Travel Back Without Visa?