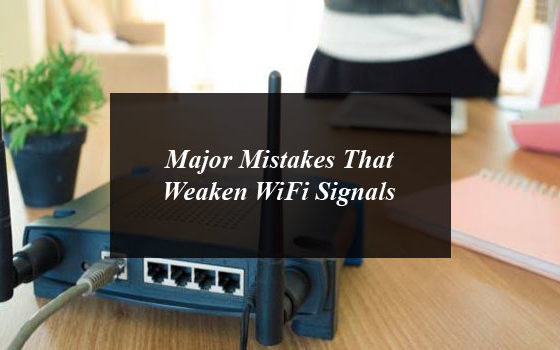 No one can deny the power of Wi-Fi. Without Wi-Fi, your extremely expensive smartphones, Laptops, PCs, Tablets are just like dead bodies.  Everyone who holds Wi-Fi tries to have the full signals within the house so they find any interruption in getting seamless internet connectivity. But sometimes we make some major mistakes while keeping the WiFi device on a wrong place that causes the WiFi signals to drop and cause trouble in connectivity.

Today we will tell our readers about that mistake that they do unconsciously and they result in weakening Wi-Fi signals. If you are one of them who are facing that their Wi-Fi is not working well and has low signals you must ponder over this issue to make the Wi-Fi signals strong. Because it’s our faults that make WiFi signals weak.

Here are some of the major mistakes that weaken WiFi signal. You should avoid them instantly if you are making any in order to have seamless internet connectivity.

If you are placing your WiFi device on a metal table instantly remove it and place it somewhere else. Because of the WiFi device is fixed to a metal table, then the electromagnetic waves start to absorb into the metal and that’s the major cause you feel weak WiFi signals.

Cement walls don’t let the WiFi signals to pass through:

On the other hand, the cement walls do not allow the WiFi signal to pass through it. This is why WiFi signals cannot reach from one floor to another. So if you want to make your Wi-Fi signals within the house try to place your WiFi device in an open space so the signals move all across the house.

If you place your WiFi device near the mirror its glossy surface which has reflecting element weakens the WiFi signals by reflecting the electromagnetic waves that fall on it. Don’t place the router near the mirror for having the seamless internet.

Don’t place WiFi router near a refrigerator or washing machine

Fitting WiFi devices near such electrical devices can cause water vapors to enter into the router and resulting in damaging the device.

The majority of people install the WiFi devices near the computer for having better connectivity but instead of an advantage, they are getting the disadvantage of placing the router near the computer. The monitors do give off a small amount of radiation that weakens the WiFi signal path and prevent them from spreading.

The WiFi device should not be placed too close to a monitor as well to avoid interruption.

How to Avail Telenor Free Whatsapp Offer?
How to Get Home Loans from Banks in Pakistan?