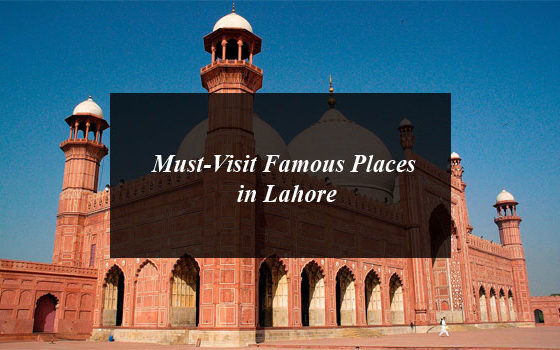 In this article, we will talk about the must-visit famous places in Lahore. The visitors from Pakistan and abroad can visit these famous places in order to make their Lahore tour perfect and memorable.

Pakistan is a beautiful country and the best place to spend the holidays. Tourism is widely increasing in Pakistan. Pakistan is also ranked as the No 1 travel destination for 2020 with the opening up more attractive beautiful mountains, authentic culture and friendly people, there is no better time to visit the country than now.

So if you are planning to visit Pakistan you must visit Lahore to see its famous historical places. The best time to go to Lahore is from September to October because the weather becomes moderate to easily explore the beauty of the city.

If you are visiting Lahore for the first time explore and must visit famous places there.

Below you will find all the information about the must visit famous places in Lahore.

Badshahi Mosque is the most famous and historical mosque of Mughal culture. It was built in 1673 in the era of Mughal Emperor Aurangzeb in Lahore, Pakistan. It is one of the Lahore’s must visit place and a major tourist attraction symbolizing the beauty and grandeur of the Mughal period.

Badshahi Mosque is the second largest mosque in Pakistan, capable of accommodating over 55,000 worshippers. The design of the Badshahi Mosque is similar to the Jama Masjid in Delhi, India, which was built by Aurangzeb’s father, Emperor Shah Jahan in 1648.

Badshahi Mosque was the largest mosque in the world for a long time.

The Lahore fort was altered by Jehangir in 1618 and later impaired by the Sikhs and the British, though it has now been partly restored.

Inside the Lahore Fort the Mughal emperor Shah Jahan built the Shish Mahal (Palace of Mirrors) in 1631.

Lahore Museum was founded in 1865. It is also famous for its broad collection of Buddhist art from the early Indo-Greek and Gandhara kingdoms.  The Mughal Empire, Sikh Empire and the British Empire in India collections are also placed in Lahore Museum.

It has the largest collections of archaeology, history, arts, fine arts, applied arts, ethnology, and craft objects in Pakistan. So if you visit Lahore must-visit Lahore Museum to enjoy the collection of ancient empires.

Wazir Khan Mosque is 17th-century mosque located in the city of Lahore. Built in 1634-35 the construction work of the mosque took seven years.

It is also one of the must visit famous places in Lahore.  It is the most lavishly decorated Mughal-era mosque of the era of Mughal Emperor Shah Jahan. Wazir Khan Mosque has a remarkable blend of calligraphy, geometrical forms and floral decoration.

Wazir Khan Mosque is located in Lahore along the southern side of Shahi Guzargah, or “Royal Road. The mosque also faces a town square known as Wazir Khan Chowk, and the Chitta Gate.

To visit the Eiffel Tower replica in Bahria Town will be an added traveling experience in your life if you traveling to Lahore. It is blending of modern lifestyle looks pleasing to the eyes with the multicolor lights.

Fort Road Food Street Lahore is also the must visit famous place. It’s a fascinating place to see the cultural and historical architecture along with the yummy food served by the different restaurants there.

If you planned to visit Lahore must pay a visit to the Fort Road Food Street there as it contains the 25 heritage buildings renovated to their former glory and 27 restaurants to quench your appetite.

Fort Road Food Street Lahore has both tastes and locations. You can enjoy splendid views of the Badshahi Mosque, Lahore Fort and its landscaped royal gardens along with desi food.

Minar-e-Pakistan is a monument must visit tourist destination located in Iqbal Park Lahore. Built-in the 1960s, it holds a special nationalistic sentiment for the country as on this site the Lahore Resolution was passed by the All-India Muslim League on 23rd March 1940.

A large number of tourists from different countries came here to witness the monument’s architecture of Minar-e-Pakistan.

IF you visiting Lahore must go to the Wagah border because you trip never be completed without spending an evening here. Wagah Border is a place marks the border between Pakistan and India. At Wagah border, there is a daily flag-lowering ceremony by the military and a large number of visitors come there to witness that momentum ceremony.

This military practice performed by both Pakistan and India at the same time since 1959.

Pak Army Museum is the best place to visit place in Lahore.  The Pak Army Museum opened in Lahore in September 2017 and includes the historical moments of Pakistan like history and heritage of Pakistan Movement titled ‘Rebirth of a Nation’, Quaid, Armed Forces of Pakistan, the army’s fight against terrorism, Nishane Haider Gallery, Kashmir corner, Shahada corner, the highest battlefield of Siachen and also the contributions of Pakistan in United Nations.

If you want to have a great shopping experience in Lahore must visit the Anarkali Bazaar and Liberty Market because these places are also the famous tourist destinations in Lahore. You will find here the wonderful shopping experience of buying clothes, jewelry, embroidered items to leatherwear to silk to footwear, and much more.

The tomb of Jahangir is said to be the second-most magnificent Mughal structure, by the Taj Mahal. The wife of Jahangir Nur Jahan supervised the construction of the tomb by herself.

Data Darbar is another must visit place in Lahore. It is the shrine of the famous Sufi Muslim mystic, Abul Hassan Ali Hujwiri (aka Data Ganj Baksh). This shrine has been visited by millions of visitors on the Urs festival every year.

Delhi gate was built in the Mughal era. It was one of the entrance gate to Lahore. The gate was named after the city Delhi because it confronted in direction of Delhi.

The tomb of the famous Muslim poet of Pakistan Allama Iqbal is the best place to visit in Lahore. It is located in Hazuri Bagh of Lahore. He was one of the major motivations behind the Pakistan Movement and is respected in Pakistan as Muffakir-e-Pakistan.

The Taxali Gate was built in the 16th century during the era of Mughal Emperor Akbar. The Taxali gate is also famous due to the renowned food street in Lahore where you can enjoy the desi food like Sri Paye ‘Phajjey ke paye’.

On the whole, there are a number of places to visit Lahore as well, but we have selected the must visit famous places that are worthy of watching.

You can follow us on Twitter, add and like us to your circle on the Facebook page, keep yourself updated on Linkedin and Instagram for all the latest from Technology, Entertainment, Sports, Gadgets, Latest Government Jobs, Cooking Recipes, Health and Beauty, Autos and Vehicles and Much More.