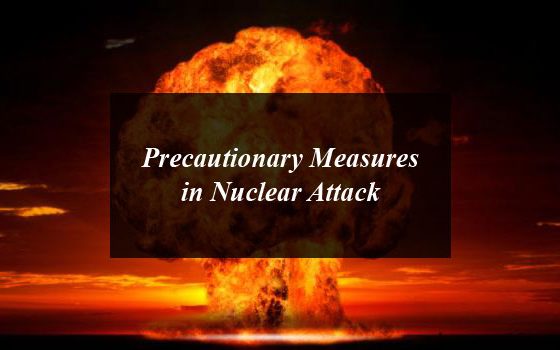 Currently there are 20000 nuclear weapons available in the world. The countries which are the biggest threat to nuclear attacks are,

In addition to this, Russia and America can also be the target of nuclear weapons. In the war situation enemy mostly target the capital city, main military areas, main cities and most populated areas.

Be updated with the current situation:

If there is war in your country keep you updated with the current situation because the nuclear attack is always the last option in the war. Determine yourself from your country and international affairs and prepare yourself in the war.

If you think there will be a nuclear attack you can only save its effects if you have a strong and secure shelter.

The best and secure place would be at least 10 feet below the ground floor. Safe shelters can be made on the ground, but it will not be able to completely prevent the radiation. The secure shelters would be made with the concrete instead of common bricks. But if you are using the common bricks make sure to use the five layers of bricks instead of one.

You need to store essential things that are enough for at least 2 to 3 weeks.

Here is the list of things that you must carry with you in your secure shelter.

Have tin packed food, vegetables, fruits, but not carry meat in tin food in order to avoid the food poisoning.

A large tank of water that will be used for bathing.

Books (which will help in passing time underground).

Potassium iodide pills (use it on the first day of nuclear attack).

Apart from this, penicillin potassium and septic antiseptic spray.

What to do if there is nuclear attack?

In the case of any terrible nuclear attack, the first principle of survival is to control the senses.

Within a second of a nuclear attack, you will heard a loud explosion and immediately see a storm of several mile high like a mushroom shape.

With this shape of explosion you can understand it is a nuclear attack.

Start the struggle to survive:

There are three stages of nuclear disaster,

If nuclear attack occurred with the one and half miles away from your location. It’s clear you about to die stand up immediately Recite Kalama, because within a second your body will evaporate in seconds.

If you are at a distance far away from the nuclear attack, you have the chance to survive.

You have just a five second after hearing the first explosion, try to run away opposite direction of the nuclear attack. Reach the wall or a deep place, lay down on the ground, holding your hands on the head cover your ear and cross your legs.

At the same time, you will be hearing another blast which will be stronger than the first one. This will produce severe earthquake.

You escaped initially so listening the second blast try to go hurriedly towards your shelter.

In the first blast, hundreds of buildings will not only fly toward the sky but their debris will come down like rain and at the same time their radiation filled alpha particles will come down.

Don’t turn back to see the blast and try to save yourself from the fallen things.

If you reached at the right place, you escaped from the fall out.

Enter your shelter and without delay change your clothes because during your struggle to reach the safe place it absorbed thousands of alpha particles.

If you are injured immediately clean your wounds and take bath if you can because in this way all the alpha particles will be removed from your body.

Now there is a radiation storm and you have to stay in a shelter for several days.

Spend your time by sleeping.

Must listen radio to keep yourself updated.

In the next few days, you may suffer from radiation and can suffer from fever, vomiting and shortness of breath. So try to use the medicines you have.

Worship to Allah and seek His forgiveness if you are a believer.

After more than 5 days the rescue teams will reach your area. So make it sure if there is rescue team is there get out of your shelter and contact with them so you can get rid of radiation area immediately.

If there is not rescue operation in your area stay in your shelter for 20 days and after 20 days you can come out because the radiation storm has ended so far.

It is quite possible that when you out of your shelter you feel that you are alive in millions. So try to leave the area as soon as possible to live your life.

How to Get Jazz Weekly Social Offer?
How to Gain Weight in a Week?