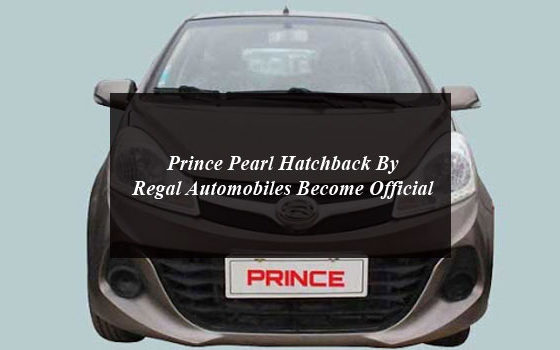 The car was launched in an exclusive event at a local hotel. Governor Punjab, high profile dignitaries and elite of the city attended the event.

Prince Pearl is launched in the country with an 800cc, EFI engine which produces 40 HP and is equipped with modern features such as power windows, power steering, and multimedia system. RAIL will be providing a warranty for 60,000 KMs or 3 years whichever comes first. Available in 6 different colors and at 16 3S dealerships (Sales-Service-Spare Parts) across Pakistan, Prince Pearl will be available in the market from 1st February 2020.

“It is heartening to see a local company take the initiative to provide such an automobile to the masses. I look forward to seeing what Regal Automobiles holds for the future.”

“This is the first time that a local company has taken a step at such a huge level to add to the economy of the country while providing a high-quality product at an affordable price. The car is a blessing in disguise for the people of Pakistan where the economy is a burning issue for the government.”

Regal Automobiles Industries Limited was established in 2017 as a technical venture between DFSK, which is the prodigious and renowned brand in China and RP Group which is one of Pakistan’s most prominent business conglomerates to manufacture and market PRINCE vehicles in the country.

At present, the company is offering a complete range of light commercial, passenger and SUV range with full after-sales and technical support to its customers. Regal Automobiles Industries Limited is the first company awarded with Green Field status under Automotive Development Policy (ADP) 2016-2021). Keeping in view of the honorable Prime Minister’s vision for the automotive industry, RAIL has invested Rs.1.5 Billion on this project to generate jobs, industrial and economic stability in Pakistan.

PRINCE, the proud brand of Regal Automobiles Industries Limited is recently launched to reshape Pakistan’s automobile industry (not limited to but mainly in four–Wheelers).The well experienced management of the mentioned company have achieved tremendous milestones and excellence over the period of more than 30 years in the field of various auto parts and Chinese origin motorcycles. Keeping in view of the CPEC and its growing potential in Pakistan specifically in logistic and transport industry the brand is backed up by the strong and long term business affiliation between Regal Automobiles Industries Limited, Pakistan and DFSK, China (Subsidiary brand of DFM, a Fortune Global 500 company) which was founded on June 27, 2003.