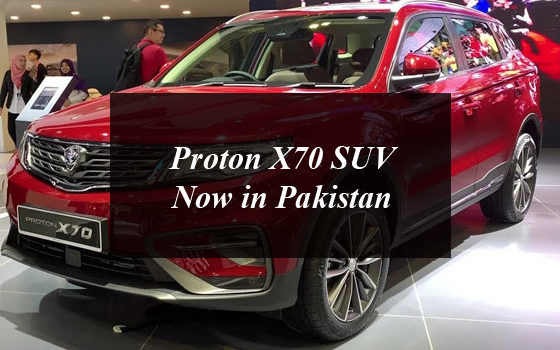 The Proton X70 SUV is actually made its preliminary debut in the country, the Malaysian counterpart Mahathir Mohamad has handed over the X70 SUV to Mr. Razak Dawood , Adviser to the Prime Minister of Pakistan Imran Khan, as a gift.

Proton is the well-known Malaysian automaker which has few days ago indicated its entry in Pakistan and today on 16th December, 2019 the X70 SUV vehicle was handed over to Abdul Razzak Dawood, the PM’s commerce adviser in a ceremony which was held at the Malaysian High Commission in Islamabad.

The Malaysian automaker Proton has joined hands with Al-Haj Group Pakistan in order to manufacture the vehicles in Pakistan.

As per the agreement between Proton and Al-Haj Group, the Al-Haj will be the official distributor of the Proton cars in Pakistan and the investment is worth $30 million. Both automakers had signed the agreement earlier this year in March. Once the manufacturing of the proton cars in Pakistan will be done it is expected that CKD units nearly 25000 units will be in the country by June 2020.

Proton X70 SUV was launched by the automaker back in December, 2018 and the company sold 26000 units so far which is definitely the tremendous success of the automaker. Now the Malaysian automaker planning to enter into the local markets and also in Pakistan with a 10-year plan. The automaker also has a plan of introducing its Saga as the first model in Pakistan.

Saga is the company’s strategy to position itself in accordance with the tax structure incentives in the country which is different for 1600 cc cars and above engine capacity.

As Proton Saga would be featuring an engine of 1500 cc and below capacity, it would greatly fit in the local market.

It is expected that the entry of Proton in Pakistan will be the challenge for many of the already existing automakers because the consumers will now have a number of options to buy as per their requirements.