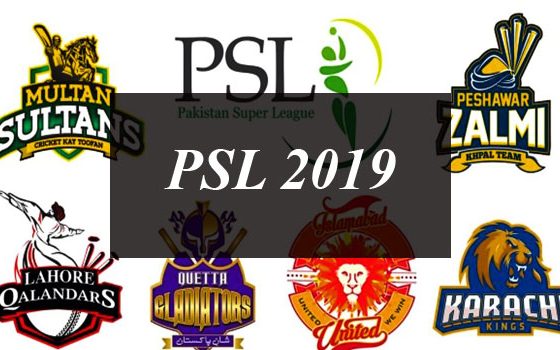 Pakistan Super League 4th Edition (PSL 4) is all set to kick off on 14th February, 2019 in Dubai. Today on Friday, Pakistan Cricket Board (PCB) has officially declared the complete details of the PSL 4. The Pakistan Super League 4th Edition (PSL4) will start on 14th February, 2019 and will end on 17th March with the final match which will be played in Karachi’s National Stadium. As per the schedule announced by the PCB the last 8 matches out of 34 of the forthcoming tournament will be played in Pakistan.

The opening ceremony of  PSL 4 tournament will be a fun filled event with the glittering stars and after the opening ceremony there will be opening match between Islamabad United and revamped Lahore Qalandars on 14th February, 2019 at Dubai Cricket Stadium.

The rest of the matches of the Pakistan Super League 4th Edition (PSL 4) will be played in Lahore and Karachi from 8th March, including the qualifying rounds, eliminators and the final.

This time total six teams will be the part of the Pakistan Super League 4th Edition (PSL 4) including;

Foreign players to feature in PSL 2019 are:

Match Timings of UAE and Pakistan:

PSL 2019 play-off fixtures are set to be played in Karachi and Lahore.

Cricket fans will be able to purchase the PSL 2019 tickets online from Q-Tickets (Dubai and Sharjah matches) and for the matches in Pakistan at yayvo.com.  The price range is between Rs.4000-6000. For more updates related to ticket information stay in touch with daytimes.pk.

Pakistan Super League 4th Edition matches will be broadcast live on TV channels including Ten Sports, PTV Sports, and Geo Super and also on the authorized to broadcast PSL 4.

Live Broadcast of PSL 2019 in Other Countries:

The PSL 2019 tickets are now up for sale and the cricket lovers can purchase the tickets for the HBL Pakistan Super League 2019 Sharjah and Abu Dhabi online on QTickets.

The official song of Pakistan Super League (PSL) 4th edition was released on 18th January and it has been sung by Fawad Khan. The anthems of the PSL earlier editions was sung by Ali Zafar.

The anthem is written by Shuja Haider with the lyrics Ye Khel Diwano Ka”.

IT HAS ARRIVED! 🎺🎺🎺
The official anthem of the #HBLPSL 2019 by @_fawadakhan_ ft. Young Desi, #KhelDeewanoKahttps://t.co/P4nSglVOpU

For more information about the PSL 2019 stay in touch with daytimes.pk