How to Watch PSL 4 Live Streaming? 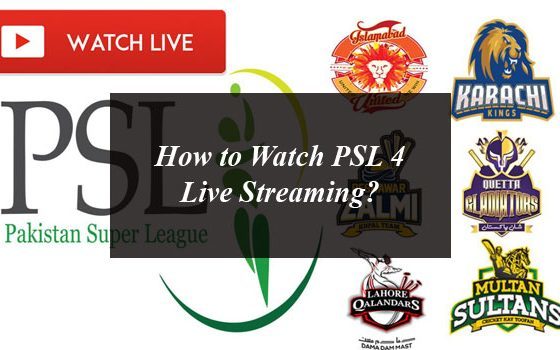 The Pakistan Super League 4th Edition (PSL4) is all set to start tomorrow on 14th February and will end on 17th March 2019 with the final match which will be played in Karachi’s National Stadium. As per the schedule declared by the PCB the last 8 matches out of 34 of the forthcoming tournament will be played in Pakistan.

The opening ceremony of PSL 4 tournament will features the fun filled performances of the glittering stars and after the opening ceremony there will be opening match between Islamabad United and Lahore Qalandars on 14th February, 2019 at Dubai Cricket Stadium.

Pakistan Super League 4th Edition matches will be broadcast live on TV channels including Ten Sports, PTV Sports, and Geo Super and also on the authorized to broadcast PSL 4.

Live Broadcast of PSL 2019 in Other Countries:

You can also download the cricketgateway application for Android or iOS to for the live stream on your smartphone and websites.

On the other hand you can also download the SonyLiv app, LiveNet TV app, PTCL Smart TV app  to watch the live action.

FM 101 network of Radio Pakistan will also broadcast live updates of PSL during their normal transmission.

For more information about the PSL 2019 stay in touch..