How to Watch PSL 5 Live Streaming From Anywhere Around the World? 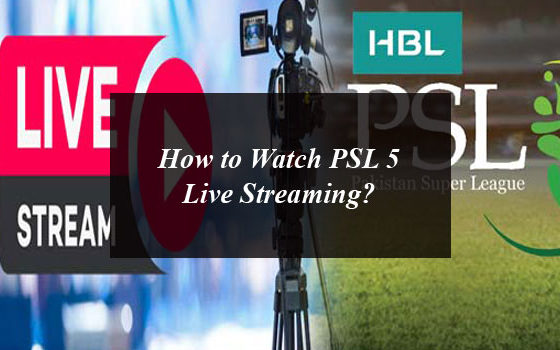 PSL 5 Live Streaming on TV Channels, smartphones, and websites. The Pakistan Super League 2020 is all set to start tomorrow on 20th February in Pakistan.

PSL 5 will be played in Karachi’s National Stadium starting from tomorrow. As per the schedule declared by the Pakistan Cricket Board (PCB) The Pakistan Super League 2020 will start on 20th February 2020 and will end on 22nd March with the final match which will be played in Gaddafi Stadium Lahore.

The opening ceremony of PSL 5 will be on 6:45 PM tomorrow on 20th February 2020 at Karachi’s National Stadium. The ceremony, which will be approximately an hour long. After the opening ceremony, there will be an opening match between reigning champs Quetta Gladiators and Islamabad United.

The complete detail about the PSL 5 matches is available here.

Where to watch PSL 5 Live Streaming?

Pakistan Super League 2020 matches will be broadcast live on TV channels in Pakistan and around the world. In Pakistan PTV Sports, Ten Sports and Geo Super will broadcast the live-action.  In India can watch PSL 5 matches will be on DSPORT. The DSPORT channel is the only channel that secured the exclusive broadcasting rights of the tournament in India.

The cricket lovers can watch the PSL 5 matches’ live streaming on the following channels;

If the viewing of the PSL 4 live isn’t helpful for you, you can switch the live stream of Pakistan Super League 2020 on your smartphones and websites. Viewers in Pakistan would watch the live stream on psl.com.pk while the viewers from different other countries would need to visit Cricingif & Cricketgateway.

You can also download the cricketgateway application for Android or iOS to for the live stream on your smartphone and websites.

On the other hand you can also watch the psl 5 matches live action on the BSports on YouTube, Tapmad, Jazz TV and Mjunoon.tv.

For the first time in the history of the Pakistan Super League to be in Urdu commentary which will be a commentary panel including Ramiz Raja, Bazid Khan, Waqar Younis and Urooj Mumtaz.

FM 101 network of Radio Pakistan will also broadcast live updates of PSL during their normal transmission.