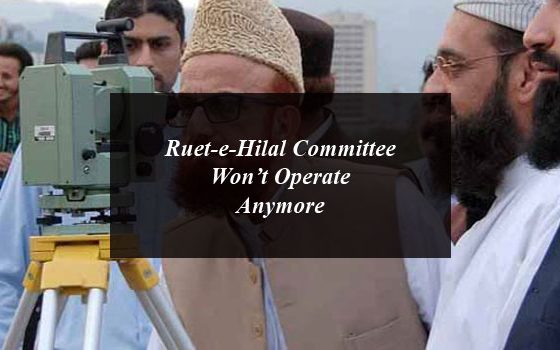 Ruet-e-Hilal Committee will no more operate in Pakistan as the Pakistan Metrologies Department to take charge of the moon sighting in the country.

Government of Pakistan has decided to close the operation of the of the Ruet-e-Hilal Committee all across Pakistan and it’s another controversial decision.

The PTI government is reportedly has decide to disband the Ruet-e-Hilal Committee at all levels across the country and now the moon sighting charge will be done by the Pakistan Meteorological Department (PMD).

As per the reports of the local media channels the government of Pakistan has taken another controversial decision of disbanding the moon sighting committee all across the country.

The Ruet-e-Hilal Committee was responsible of the moon sighting across Pakistan from the past many years under the leadership of Mufti Muneeb-ur-Rehman.

The alleged decision has been taken as the committee was caused millions of rupees to the national exchequer, revealed the reports.

Pakistan Meteorological Department (PMD) now would be responsible of the new moon sighting in the country. The Pakistan Meteorological Department (PMD) has all the scientific equipment to predict the dates of moon birth, as the new moon marks the beginning of the new Islamic month in the country as many are thinking that it will also aid to end the confusion on the sighting of the moon for when the month would start and end.

PTI government has just taken this decision the day after the chairman of Central Ruet-e-Hilal Committee Mufti Muneeb declared that the crescent of Jamadi-ul-Awal has not been sighted in the country and the 1st Jamadi-ul-Awal 1440 Hijri will be on Tuesday, 7th January, 2019.