Watch Out for the Next Exciting Campaign by Tecno: “Baray Game Ka Bara Khiladi” 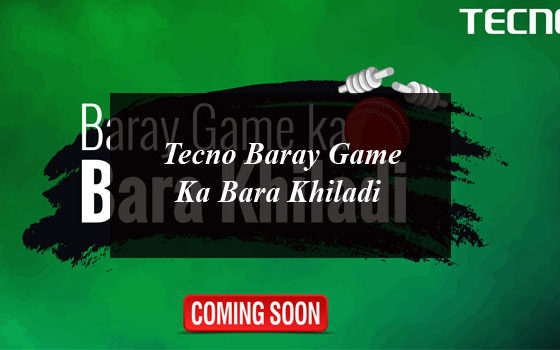 Tecno, a leading Chinese mobile Company in Pakistan has started teasing on its social media with another exciting campaign under the tagline “Baray game ka Bara Khiladi” to keep its users and audience hooked and interested.

Campaign mechanics has not been revealed by the brand but in the start they are teasing with their brand ambassadors for the campaign and asking the audience to guess to their Brand Ambassadors are???

Would you be able to guess the personalities that are going to be a part of this happening series?

The biggest news is that fans who participate in the competition will have a chance to win Tecno phones. Not only this, there will be many more exciting hampers for the participants. Like always, Tecno has got something bigger and better for its loyal customers.

Looking at the previous record, it is presumed that the upcoming campaign is going to be more fun, quirky and energetic.

Tecno has always come up with unique and engaging ideas to stay in the power game. With all its previous campaigns, the smartphone company has constantly earned appreciation and love from the audience and the users. This time, the brand has designed yet another engaging campaign featuring two of our favorite personalities.

These engaging campaigns and fun-filled competitions are the reason Tenco is growing in the market rapidly and is always ahead of all other brands. The screenshot clearly shows that the engagement on Tecno social media is much better than all other brands.

So, stay tuned for this exciting journey with your favorite faces fully involved throughout this campaign.