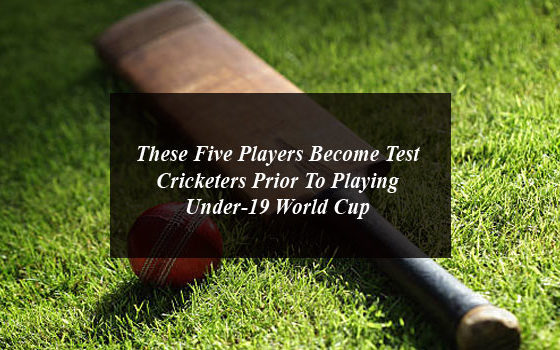 These five players who had become test cricketers prior to playing the Under-19 World Cup. The U-19 World Cup has always been regarded as a platform for every young cricketer who wants to show his extraordinary performance in international cricket.

This year the Under-19 World Cup 2020 is being played in South Africa. It will be from 17th January to 9th February.

Though in this article, we will talk about those five players who have represented their country in the U-19 World Cup after playing Test cricket. So let’s begin with,

Hassan Raza started his Test career in 1996 against Zimbabwe. He was just 14 years old when he managed to show his extraordinary performance at Faisalabad. He became the youngest cricketer in the history of Test cricket. He played his first ODI international shortly after the test match in 1996.

Hassan Raza was the captain of the Pakistan team in the Under-19 World Cup in Sri Lanka in 2000 but failed to show impressive performance in batting.

Imran Nazir played his first Test in 1999 against Sri Lanka in Lahore. He was the Pakistani team’s opener playing in the Under-19 World Cup in 2000 but unsuccessful to score a single half-century in five matches of this tournament.

However, he was more successful in ODI cricket. He scored 1895 runs in 79 ODIs with two centuries and a half.

His 160 World Cup matches against Zimbabwe in the 2007 World Cup is the best ever of the main individual innings by any Pakistani batsman.

Narendra Hirwani, India’s leg sniper, who played his first U-19 World Cup in 1988 but had already made headlines with his startling performance in international cricket.

He began his Test career in Chennai against the West Indies just a month before the Under-19 World Cup. In the first innings, he took eight wickets for 61 runs and in the second innings, he offered 75 runs.

He became the second-fastest Australian batsman after Bob Massey in the history of Test cricket, after scoring 16 wickets in his first test.

However, Narendra Hirwani was able to play only 17 matches in his international career in which he took 66 wickets.

Bangladesh’s spinner Anamul Haq Junior began his Test career in 2003 in Dhaka against England. In 2004 he played the Under-19 World Cup which was held in his home country. He took 22 wickets in 8 matches in 2004 Under-19 World Cup.

Anamul-ul-Haq Junior also showed his remarkable performance of 5 wickets for 31 runs against Australia.

Sanjeewa Weerasinghe was a school student when he first played a test match in 1985 against India in Colombo. He also became the youngest Test cricketer in Sri Lanka just at the age of 17.  He had the chance to play in the first U-19 World Cup in Australia in 1988. But in three matches he managed to get just one wicket.

He was also included in the Sri Lankan team visiting Pakistan after the test but his career ended after only one Test.