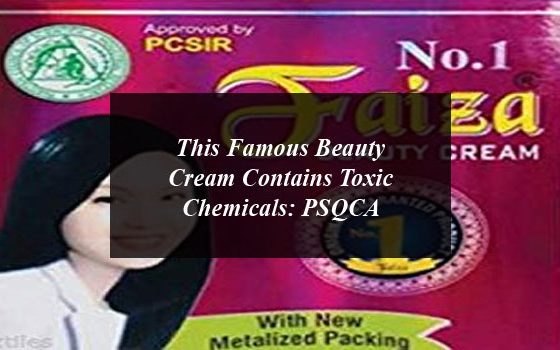 Faiza Beauty Cream contains harmful chemicals and toxic that are not safe for the skin.


This Famous Beauty Cream Contains Toxic Chemicals: PSQCA . The Pakistani market is full of fake and toxic beauty creams and there is almost now check and balance to stop the production of such type of harmful beauty creams that cause severe damage to the skin.

So girls if you are using the Faiza beauty Cream stop using it right away if you don’t want to damage your skin beauty.

Pakistan Standards and Quality Control Authority (PSQCA) has banned the Faiza beauty cream in the country and has issued notice to the manufacturer of the creams.

PSQCA has also issued notices to beauty cream and cosmetics manufacturers whose products do not meet the standards of quality.

According to the reports of the PSQCA there are harmful chemicals in the Faiza Beauty cream as the beauty cream was analyzed by public sector and private sector labs in Pakistan.

This beauty cream is causing harmful effects to the user’s skin and health as it contains mercury, hydroquinone and steroids.

Poonia Brothers are manufacturing the Faiza Beauty Cream in in Gujranwala since 2011 and till now become the largest manufacturer of Skin Whitening Cream in Pakistan.

This cream is being sold all over Pakistan at wholesale, general stores as well as medical stores and M/s Poonia Brothers has invested millions in the advertisement for this beauty cream.

The PSQCA has conducted the open market surveillance in Lahore and Karachi and has reported higher values of mercury. Therefore the PSQCA liaison office Gujranwala has issued notices to M/s Poonia Brothers over mercury value, which is greater than 60 mg/Kg (60 ppm) – much higher than the limits set by World Health Organisation (WHO) at 1 mg/kg.

The skin lightening products that contain the Mercury have the dangerous effects to the health and as a result, have been banned in Pakistan.

In Pakistan Standards, PSQCA has already integrated mercury, hydroquinone and corticosteroid limits in accordance with WHO. Moreover, Ministry of Science and Technology has issued Technical Regulation in the form of SRO 45 (KE)/2017 PS:3228/2017, dated May 19, 2017, to regulate “skin creams” all over Pakistan through PSQCA. However, there are reports of such products still being sold while being heavily advertised on different media channels.

Why Does The Diet Go Into Anorexia?
Huawei Y5 Lite 2018 Now Available in Pakistan