This is How You can Donate Funds for Dams’ Construction in Pakistan. The water crisis in Pakistan is aggravating and the reports revealed that if water reservoirs are not built Pakistan will have absolute water scarcity by the year 2025. Dams are needed in Pakistan to trounce water shortage and perk up the power generation supply in the country.

Chief Justice of Pakistan, Mian Saqib Nisar has himself donate Rs. 1 Million for the construction of dams and as per the statement of Supreme Court the staff (BS-2o to 15) will donate days’ salary of the current month.

Director General ISPR, Major General Asif Ghafoor also declared that the officers of the army, navy and air force will donate their two day salary for the construction of dams.

The State Bank of Pakistan (SBP) has jumped into the matter and decided to collect more than the required funds from the entire nation for the construction of Diamer-Bhasha and Mohmand dams.

According to the statement issued by the SBP that the below mentioned account is now operational to collect donation. People across Pakistan can donate funds through 16,000 bank branches and ATMs.

How can the people donate for Dams Construction in Pakistan?

The total amount that the people donate so far  is

How to donate Via SMS? 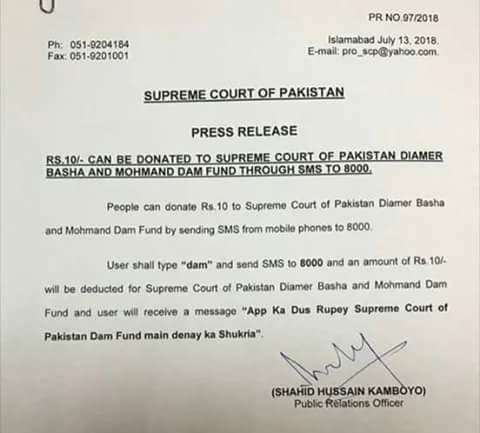 If you want to donate fund of Rs.10 for the construction of Diamer-Bhasha and Mohmand dams for combating the water crises in Pakistan you need to follow the simple procedure below: