Whom God Keeps, No Frost Can Kill: Meet the Sudanese Plane Crashed Infant after 15 Years

Meet Mohammad Al-Fateh Othman after 15 Years, who is the Survivor of Sudanese Plane Crashed in 2003

All the passengers of the plan met the death except the little infant who was of two year at that time. He was in the arms of her mother when the Sudanese Airways plane traveling from Port Sudan to Khartoum. Everybody on the plane died except him and was found by a worker near a tree.

In order to save the life of infant a number of businessmen and influential people financed his treatment leading to his recovery. They also financed his education and now he is 17 year old boy and a student of information technology in Egypt. 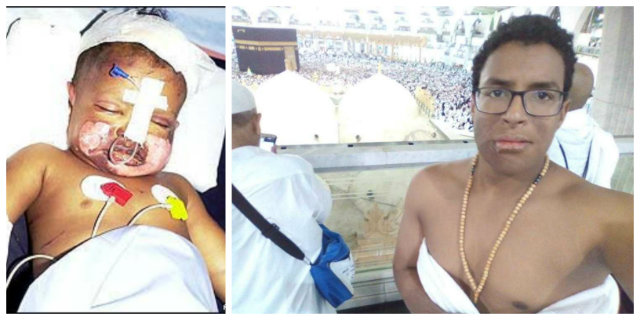 Mohammad Al-Fateh Othman has come to perform the religious duty Hajj this year on the invitation by Prince Sultan Bin Salman, head of the Saudi Commission for Tourism.

When he got the invitation from the Prince Sultan Bin Salman he was overjoyed and expressed his feelings in these worlds to Saudi Gazette:

“I was over the moon when I received the invitation. I never had the chance to come to Saudi Arabia before and I can’t think of a better reason than to perform Hajj.”

“Don’t get me wrong I travelled to many places. People often assume that I have a phobia of planes because of the crash but I love being on airplanes and I don’t remember the crash. I was barely two years old.”

Othman has father and a sister (Lina) in his family. His father also recalled the day when he lost his wife and was about to lose his son but the Allah had saved his life.

Hajj is the one of most important five pillars of Islam. Every year thousands of Muslims from all across the world come to perform Hajj in Saudi Arabia.

This year Hajj is formally anticipated to fall between Sunday, 19th August and will continue till Friday, 24th August 2018.