You Can Enjoy These Pakistani Movies On Eid-ul-Fitr 2019 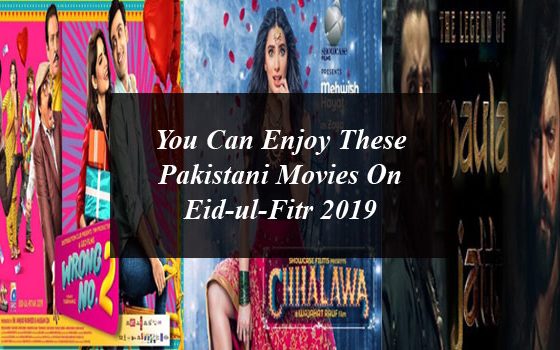 List of Pakistani movies that are schedule to release on Eid-ul-Fitr 2019 in Pakistan. Pakistan Film Industry is functioning harder to elevate it higher and to become one of the successful film industry in the world. In the film industry new projects have been in progress and some have been accomplished. This Eid ul Fitr several most entertaining, full of action and comedy films are schedule to release in Pakistan. The Censor Board of Pakistan had banned the screening of the Bollywood movies in the country so there would only be the Pakistani movies that will be screened on cinemas.

This Eid-ul-Fitr several movies are schedule to hit the cinema screens including Chhalawa, The Legend Of Maula Jatt and Wrong Number 2.

you can watch the teaser of the movie Chhalawa below:

The Legend Of Maula Jatt

The Legend Of Maula Jatt is the action drama film which is schedule to release on Eid ul Fitr. it is actually the sequel of the 1979 movie Maula Jatt (Pakistani Punjabi action film featuring Mustafa Qureshi and Sultan Rahi).

The Legend Of Maula Jatt is directed and written by Bilal Lashari, produced by Ammara Hikmat and Asad Jamil Khan under production banner of Encyclomedia.

Directed and produced by: Bilal Lashari

You can watch the teaser of the movie The Legend Of Maula Jatt below:

You can watch the teaser of the movie Wrong Number 2 below:

This is a developing story for more information stay in touch with daytimes.pk.